The township of Cronton, in the West Derby Hundred, appears in the Norman document the Testa de Nevill as Grohinton and Crohinton, in other sources it appears as Croynton (1292); Croenton (1348) and Crawenton (1562) this later spelling reflecting its Saxon origin as a ‘settlement of crows’. The township lies within the parish of Farnworth and is situated 7 miles west of Warrington, 5 miles south of Prescot and 4 miles south of St Helens.

The manor formed part of the ancient Barony of Widnes until about 1250 when Edmund de Lacy gave the township, his land and feudal rights to Stanlaw Abbey as alms. The Abbey retained ownership until the dissolution of the monasteries in 1537 when the manor was sold to Thomas Holt of Gristlehurst.

Although present-day Cronton has a link to astronomy through Pex Hill Observatory, a much older link exists through Charles Leadbetter. Leadbetter was born at Cronton in 1681 and would later become a well-known mathematician, navigator and astronomer. He had four books published during 1720s-1730s and became a gauger for Customs and Excise in London before his death there in 1744.

For over a century the manor and lands of Cronton passed through a succession of owners as it became sub-divided into smaller and smaller plots and sold and resold to local land-owners. The Wright family eventually becoming sole owners of the manor in the mid seventeenth century. Successive generations of the family lived at Cronton Hall until 1821 when it was again sold, this time to Bartholomew Bretherton of Rainhill who enlarged the house and grounds that already existed.

Cronton Hall is a prime example of the ‘Queen Anne’ style house and is now the centre of the Town End Conservation Area, which covers not only the Hall and its outbuildings but also a group of 18th Century farmhouses including Sunnyside, Town End Cottages and Town End Farm, the latter is believed to be the oldest building in the village by virtue of its 1705 datestone. Writing in 1906 the historian Charles Poole, said of Cronton that there was ‘none so rich in old houses and ancient landmarks’.

The focus of the Town End part of the township is the ruin of Cronton Cross, which is thought to mark a resting place for funeral processions on their way to Farnworth Church. Such crosses were quite common in large parishes which contained several townships, but only one church, although very few of the crosses have survived. The precise age of the cross is unknown although the parish records do contain a reference to it being repaired in 1734. Another cross, on the summit of Pex Hill, was destroyed in 1868 by the Widnes Corporation during the construction of reservoirs, some of which are still in use today.

On the side of Pex Hill is a hole, called ‘Molly Top’s Hole‘, from which a stream of water runs. According to local legend, this is the site of a small cave which was used by Molly Top as a hiding place during the Civil War. At the base of the hill, on the Warrington Road, is an interesting row of cottages which were built alongside the ‘Bears Paw‘ Inn. In 1780 they were converted into a workhouse for the poor, reverting back to cottages in 1843 when the new Prescot Union Workhouse at Whiston was opened.

Cronton was renowned in the sixteenth century for its array of tool-workshops and inherited a similar reputation in the watchmaking industry from neighbouring Prescot. Although the local trade directories in the late nineteenth century still refer to this reputation there is no direct evidence of it today. A photograph believed to be taken in Cronton in the 1920s does show a rather grand cottage with unusual windows, which may possibly be associated with watchmaking, or maybe this building was at one time the local school? 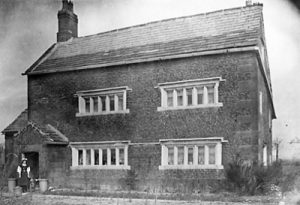 Distinct from the Town End area of Cronton is that of the ‘Smithies’ which took its name from Smithy Lane, with the smithy itself appearing to have belonged to the township until it was sold in 1820 to Mr H. Rigby. This part of the township contains the village stocks, a surviving testimony to local crime and punishment and an unusual example containing five holes. Stocks were originally introduced in England in 1350 to punish minor offenders (usually for drunkenness) and are often located close to an inn. This was the case at Cronton with the stocks originally positioned opposite The Unicorn Inn (which dates from 1752). The stocks were moved into Smithy Lane in 1955.

Photographs of the stocks taken in the 1920s, also show the parapet stones of St Anne’s Well, the waters from this natural spring were said to be particularly effective at curing rheumatism. The well was filled-in in the late nineteenth century, but is recalled in the name of a number of surrounding farmsteads.

Close-by at the junction of Cronton Road and Smithy Lane was the Beehive Inn which was renowned for its sign, which used to carry the following rhyme;

Whithin this Hive we’re all alive, good liquor makes us funny,
As you pass by, step in and try, the flavour of our honey.

On 6th September 1990, Cronton’s war memorial in Smithy Lane was unveiled and consecrated, commemorating the local casualties of both world wars. The war memorial was commissioned by Cronton Parish Council.

The area of Pex Hill became a place to visit for budding astronomers when Liverpool Astronomical Society opened their new observatory there. The official opening was made by the celebrated astronomer Patrick Moore on 20th March 1994.

In 2007, both Cronton’s cross and stocks were restored as part of the Restoration of Historic Crosses, Milestones and Landmarks Project. They are both classed as Grade II Listed as are the Gate Piers and Gates at Cronton Hall; Sunnyside Farmhouse, Hall Lane; Town End Farmhouse, Hall Lane; The Field, The Roundabout; Redmyre, Chapel Lane and Wayside, Pex Hill.

The building formerly known as the Black Horse public house on Cronton Road has been refurbished and when it re-opened in April 2019, it was under the new name The Dandelion Tavern.

The Coronavirus pandemic in 2020 dominated the news for the whole year. A timeline of the events that occurred can be consulted here: COVID-19 National and Local timeline 2020

As the Coronavirus pandemic continued in 2021 with new variants appearing, a further timeline shows the changing situation throughout the year:  COVID-19 National and Local timeline 2021

The success of the UK’s vaccination programme has meant that coronavirus restrictions have been eased in 2022. A summary of information can be found here: COVID-19 National and Local timeline 2022 (to the end of May)

You can find out more about which cookies we are using or switch them off in settings.

This website uses cookies so that we can provide you with the best user experience possible. Cookie information is stored in your browser and performs functions such as recognising you when you return to our website and helping our team to understand which sections of the website you find most interesting and useful.

Strictly Necessary Cookie should be enabled at all times so that we can save your preferences for cookie settings.

If you disable this cookie, we will not be able to save your preferences. This means that every time you visit this website you will need to enable or disable cookies again.